Welcome to my weekly series “Designing from Bones”, using archaeology and the artifacts of human history to find and design stories. Join me today as we visit a real world island Dystopia with a rich past stretching back several millennium.

After days traversing the rough seas, our boat finally rests on the sandy beach of Hirta. A small field dotted with goats and thatched roof houses spreads before us. In the distance, cliffs and mountainous rises form a horseshoe, locking the valley in a world all its own. Welcome to Dystopia.

The Isle of St. Kilda 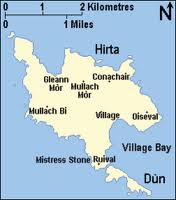 The archipelago of St. Kilda lies forty miles off the northwest coast of Scotland and sports the highest cliffs in the United Kingdom. The primary island of this chain, Hirta, has a history stretching back to the Neolithic Age (circa. 4000 B.C. to 2200 B.C.). When the island was inhabited, its population never exceeded 180 residents and at times fell so low that “outlander families” had to be imported in order to stabilize the society. The diet and practices of the inhabitants changed little over the course of nearly two millennium. In the end, the impact of outside influences had such a severe effect that the island had to be evacuated, effectively ending 5000 years of successful habitation.

Dystopia’s tend to be sheltered locales, hidden from the corruptions of the civilized world. Come with me as we explore the island in search of its lessons.

The Setting of Dystopia

The Island of St. Kilda is an ideal location for a Dystopia in practically any time frame. It is difficult to reach by any means other than water and even then, only one location provides easy access. Isolated from the rest of the world this pocket community was able to grow freely.

While the island has a small valley along its primary bay where goats and barley can be raised the majority of the island is covered with steep cliffs and harsh mountains. The waters surrounding the island are dangerous to fish due to weather, tide and current. The main food source of the inhabitants came from puffins and other birds that roost in large numbers along the cliffs and crags.

The grocery store is at the top of the cliff.

The difficulty of the location and the small size of the population led to a dangerous but necessary test of manhood. In order for a young male to be considered worthy of a mate, he would have to hunt and return with several puffins. This was a dangerous mission but by successfully returning, the boy would prove himself useful to the community, capable of supporting a family and thus find acceptance as a man within the society.

For writers, this makes for a powerful coming-of-age story yet it doesn’t have to revolve around a male hero. Reverse the nature of the people of St. Kilda and make the society matriarchal. Now our hero becomes a heroine that must prove herself worthy of respect, command and a mate. Or make it a hybrid society where potential mates must hunt together to prove that their union is one that the micro-society should accept and bless. What challenges and tragedies await our young lovers along the dangerous cliffs?

What if something more dangerous than puffins lived in the shadowed crags? What things might haunt the cliffs at night or swim in the waters offshore encouraging the residents to stay and making would be invaders pause? How would an isolated village, with no supporting neighbor communities, handle such issues as famine, harsh weather, predators or any other threatening crisis?

Let’s take a look at the society that formed on Hirta to gain some clues into creating a similar society for a potential story world.

The Society of Dystopia 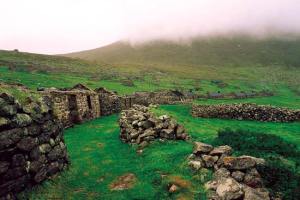 It is believed that the first known Parliament formed on St. Kilda. Due to the size of the society and the tenuous nature of life on the island, the men of the village (which is to say, all the men of the island) would meet every morning to discuss what needed to be done for the day and what action each would take.

While discussions were sometimes heated, no conflict ever grew to the point of tragedy thanks to the open nature of the discussions and the need for survival-based unity. It is notable that over the course of four centuries of known history not a single serious crime was recorded by the inhabitants. What modern society could say the same?

Consider what type of society can be created to handle an isolated community such as this? Would they be an open society or one ruled by a familial tyrant? What if a disagreement from morning Parliament led to murder or a rival of the tyrant chose civil war? With such a tightly-knit community, either event would be devastating.

One thing to remember when approaching a Dystopia is that even the smallest choice can have a large impact. In addition to this, any external influence can lead to mass destruction.

Other boats approach the shore now. Join me as we watch the impact of these invaders to paradise.

The saying, “nothing lasts forever”, is the friend of writers and the bane of any sheltered community. Over the centuries a wide assembly of visitors came to the Hirta. Here are three examples that we can learn from.

In 1746, a rumor spread that Prince Charles Edward Stuart and the elite of his Jacobite supporters had fled to St. Kilda after their defeat at the Battle of Culloden. Soldiers were dispatched to the island to investigate the rumor. The inhabitants, fearing that the soldiers were pirates, fled the village and hid in the cliffs. Eventually, the soldiers persuaded them to come out of hiding only to discover that they had never heard of the Prince or his father, their supposed King.

The lesson, a Dystopia is cut off from knowledge of the world around it.

Imagine a hero that enters this scene. How would he view these people? How would they respond were he to attempt to educate them or claim the right of rule over them? 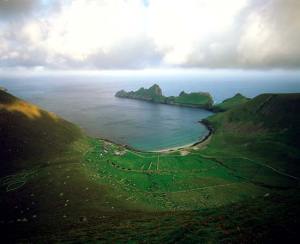 Paradise is both beautiful and fragile

In 1615, Coll MacDonald raided the island and stole a large quantity of sheep and barley. This, of course, led to other raids. As the reputation of the island and its simple way of life spread, others began to invade the island for recreational purposes. One such visit included up to 60 people that used St. Kilda as a religious resort and rejuvenation location in 1697.

The lesson, a Dystopia cannot resist the invasion of a stronger external force.

How would an islander hero handle a raider or someone believing they could do as they wish due to superior strength of arms? Would our heroine, in a matriarchal society, attempt to preserve her peoples way of life with seduction or would she take the invaders hunting before an accidental fall off a cliff?

Visiting ships continued to arrive and exploit the meager bounty of St. Kilda. The ships brought smallpox and cholera to the island and by 1727 these diseases had killed so many of the original inhabitants that new ones had to be shipped in from Scotland to replace them. This cycle continued until the island was forcibly evacuated in 1930.

The lesson, there are weaknesses to a Dystopia that cannot be discounted, such as disease resistance.

How would our hero or heroine respond to the deaths of their people from an unknown disease? If our hero was one of those shipped to the island to replace a dead inhabitant what kind of reception would he face? How would this merger of cultures affect both the new arrival and the established inhabitant?

Now my friends we must leave this place and let is drift back into the mists of time. If we have learned nothing about Dystopia’s it is that they are fragile.

What will your Dystopia be and what will rock its foundations?

Looking for more great ideas and information on writing? Check out my previous “Designing from Bones” entries. Join me next week as we go in search of some of the incredible and mysterious treasures of the ancient world.

Gene Lempp is a writer blending elements of alternate history, the paranormal, fantasy, science fiction and horror for dark and delicious fun. He unearths stories by digging into history, archeology, myth and fable in his Designing from Bones blog series. “Only the moment is eternal and in a moment, everything will change,” sums the heart of his philosophy. You can find Gene at his Blog, Twitter, Facebook, Goodreads, WANATribe, Google+, Pinterest and StumbleUpon.
View all posts by Gene Lempp →
This entry was posted in Designing from Bones and tagged Battle of Culloden, Coll MacDonald, designing from bones, dystopia, Gene Lempp, GeneLempp, Hirta, islands, Jacobite, matriarchy, Neolithic, Parliament, Prince Charles Edward Stuart, puffins, Scotland, St. Kilda, United Kingdom, writers, writing, writing prompts. Bookmark the permalink.