Designing from Bones – Lessons From Attila

Welcome to my weekly series, Designing from Bones, where we use archaeology, mythology and the artifacts of human history to find and design stories. Join me today as we look at three writing lessons from the life of one of antiquities greatest conquerors, Attila the Hun.

Come, friends, the misty portal awaits to transport us to ancient days when great armies fought over control of civilized lands, picking the bones of the dying Roman Empire.

The Power of Name

The Huns, likely descendants of the Xiongnu (northern neighbors of China around the turn of the eras) began their westward expansion in 370 CE. In 434 CE, Rugilia, second ruler of the united Hun tribes died leaving his brothers sons, Attila and Bleda in charge. The two brothers became the scourge of Western and Eastern Rome and the Sassanid Empire (former Persia) conquering and forcing the submission of once powerful nations. In 445 CE, one of the brothers (it is unclear as to which) tried to kill the other and Attila won, claiming the Hun throne for himself.

While the name Attila may be a personal name it is likely that in this case it is meant as a title, meaning “father” or “universal ruler” in the Turkish dialect spoken by the Huns. Attila’s given name remains shrouded in mystery like much else about the man. Mystery and anonymity form the twin souls of legend.

Attila’s name provides a lesson for writers. At times, the name most remembered by our readers is the one that best describes the hero or characters role in the story. Consider the name, Scout, in To Kill A Mockingbird. Attila was indeed the universal ruler of the Huns controlling one of the greatest empires of the ancient world. He was also father to many, both literally and figuratively. That his given name is lost to time serves to show that his function in society was seen as more valuable then the man himself.

By finding the name that brings our characters deepest function into clear view we empower them to life in the mind of our readers.

What name best describes your hero? Can we, like Attila, merge the characters function with a specific name that provides a clear clue to our readers about the nature of the person? Or perhaps about their destiny, fate or skills?

Seeing how our characters describe themselves, their pasts and their intended futures is an excellent way to unlock a powerful name that readers will remember.

Foreshadowing the End at the Beginning

Legend has it that shortly after his ascension as king, Attila went to visit a seer called the Hermit of the Rocks to inquire about his future. The Hermit peered into the fog of time and said, “I see you as a famous conqueror, ruler of many nations. I see you going from country to country, defeating armies, destroying cities until men name you ‘The Fear of the World’. You heap up vast riches, but just after you have married the woman you love, grim death strikes you down.”

Fast forward to 453 CE, Attila is on the verge of assaulting Constantinople to force the vacillating Marcian to pay tribute. He is known as the Fear of the World, among many other less flattering names. He has made his greatest enemies bow in tribute and acquired uncountable riches.

Attila stands on the threshold of eternal greatness and celebrates by marrying a woman that is said to be his greatest love, Ildico. The world is his. And then. He dies.

Some say he met his end at the hand of one of Marcian’s assassins. Others that his love slew him with her own hand after the consummation of their wedding. Yet others, believe his death was caused by esophageal varices or internal bleeding brought on by excessive drinking.

Regardless, the great conqueror died as predicted by the Hermit of the Rocks. His conclusion foreshadowed from his inception.

Do you know your destination?

Consider the following. How can one pack for a journey if they do not know where they are going? How can one plan their route without knowing their destination?

Counter-intuition is the key. Our beginnings are found through our endings and indeed the two should be a reflection of each other. The true story lies on the journey between these places, where the twists, turns, surprises, obstacles and most importantly, choices of our heroes await all connecting in a powerful conclusion foreshadowed by the beginning.

If we know our destination then finding the myriad paths to it becomes clear.

Layers of Life Reflected in Death

Attila bequeathed his only wish regarding his death in a royal decree: That his sleep not be disturbed. This was a tall order given the nature of humans to despoil graves, disrespect the dead and invade the privacy of the undefended. 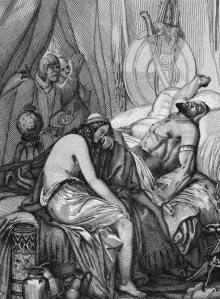 According to legend, those closest to Attila and a cadre of loyal soldiers diverted an unnamed river long enough to bury the great king in his three-layered coffin. The soldiers were then either killed with arrows or slew themselves before the river was set back on its course, hiding Attila’s tomb and ensuring that his wish of peaceful sleep would be fulfilled. To this day, the location of Attila’s tomb remains a mystery, but one indisputable clue remains should it be found, the three-layered coffin.

Myth has it that Attila was first placed in a golden coffin as tribute to his great wealth. This coffin was then placed within a silver one referring to his love of the moon and rivers and finally the two were placed into an iron coffin as a sign of his strength. While this story may be metaphor or propaganda, each of these coffins reveals a character layer of the entombed champion.

When we consider our heroes and other main characters what rich, diverse layers do they display? What are the core qualities of those we portray? Can they be related to something else, such as gold or silver or iron? If our hero could demand one wish regarding their death what would it be and how would his friends or followers honor that wish?

I now return you through the misty portal to your own time and place before we disturb the final wish of the mighty conqueror, Attila. May he ever rest in peace. 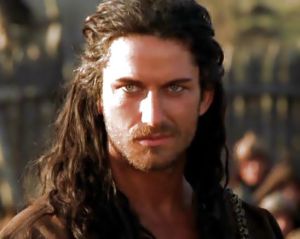 Gerard Butler as Attila; He would be pleased.

Have you found inspiration through a historical figure? Have a favorite conqueror? I’d love to hear from you.

Gene Lempp is a writer blending elements of alternate history, the paranormal, fantasy, science fiction and horror for dark and delicious fun. He unearths stories by digging into history, archeology, myth and fable in his Designing from Bones blog series. “Only the moment is eternal and in a moment, everything will change,” sums the heart of his philosophy. You can find Gene at his Blog, Twitter, Facebook, Goodreads, WANATribe, Google+, Pinterest and StumbleUpon.
View all posts by Gene Lempp →
This entry was posted in Designing from Bones and tagged Attila the Hun, Attila's death, Bleda, China, designing from bones, esophageal varices, Fear of the World, Gene Lempp, Hermit of the Rocks, history, Huns, Ildico, legend, Marcian, mythology, Roman Empire, Rugilia, Sassanid, To Kill A Mockingbird, Turkish, writing, writing prompts, writing tips, Xiongnu. Bookmark the permalink.

16 Responses to Designing from Bones – Lessons From Attila