Welcome to Designing From Bones, where we use archaeology, myth, mysteries and history to unearth the stories of tomorrow.

The heart of fiction is conflict. When searching history, finding conflict, controversy, disagreement and recanted fact once firmly defended transform into pivotal clues that should capture the attention of the fiction writer. Let me share an example with you today as we take a look at the “oldest” modern human in history. 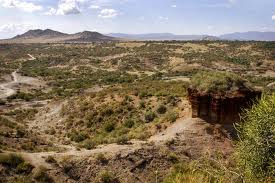 Olduvai Gorge with its natural monolith.

Olduvai Gorge – The Cradle of Mankind – this desolate area of Tanzania has seen some of the greatest paleontological discoveries of the modern era. A million years or more ago, the Gorge was a lake bed surrounded by the first thriving hominid cultures, not to be confused with homo sapiens (modern humans), but rather our predecessors. Most have heard of Louis Leakey and his excavations of 1-2 million year old skeletons, such as the ever famous Lucy, at this location. However, I would bet that most have never heard of Hans Reck and what at one time was heralded as the oldest modern human skeleton, found in the same location.

Hans Reck, German vulcanologist and paleontologist, went to Olduvai Gorge in 1913, almost twenty years before Leakey. Reck found a full homo sapiens skeleton locked into rock and sediment dating between 1.1 and 1.7 million years of age. There were no signs of digging or invasion (drifting down from a younger, higher level of earth) nor any overt type of disturbance to indicate unnatural influence in the skeletons location.

The main problem with Reck’s theory was that common scientific understanding, then as now, felt that no anatomically modern humans existed before 150,000 years ago. He was going against the grain, digging up things his peers did not want to accept. However, at the time of discovery, all the proof pointed to a member of our modern species living and dying in the Olduvai Gorge over a million years earlier then the best scientific guess.

Louis Leakey, like many of his day, thought that Reck’s findings must be in error, so he invited Reck to join him on an expedition to the Gorge in 1931 to settle the issue. Reck agreed and the by the end of the trip, Leakey was thoroughly convinced that indeed, a modern human had walked the earth over a million years before we were supposed to exist. In fact, Leakey was so convinced that he co-wrote a paper with Reck that was published in Nature magazine (1931, vol. 128, page 724) with their findings.

However, others continued to disagree with any theory that went against the established belief and unquantified evidence slowly built to discredit Reck and Leakey’s theories. Those rocking the boat are the first to be cast off. 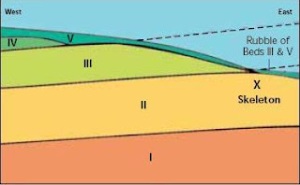 In 1932, P.G.H. Boswell, an English geologist, claimed to have found small stones and sediment that were indicative of younger layers of strata that lay above the find. However, it was never stated as to whether these samples were taken from the matrix that the skeleton was found in or from loose fill. See, Reck had the entire block of earth the skeleton was found in excavated as a single piece and shipped to Munich with an inevitable amount of loose upper soil filtering in during the process.

Then, in 1933, Reck and Leakey inexplicably gave in to pressure and recanted their findings in a joint paper with Boswell and two other scientists (Nature, vol 131, pages 397 – 398). While scientific errors occur, this was a location that both experts had studied in person and firmly defended only to shift that belief two years later in the face of unqualified disagreement (peers with an opinion and no empirical proof) and hazy research. Everything, except the skull, disappeared during the course of World War II. 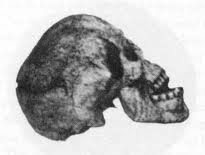 Skull of Olduvai Man - the only piece remaining from Reck's find after WW II.

Now it is possible that I’m pushing the boundaries here to an extent, but given that the matrix sample and skeleton disappeared during the Nazi regime in the 1940’s and Hitler was a known collector of odd and occult-based objects – given that no way to conclusively prove anything still exists – and given, that Leakey and Reck both had considerable reputations to protect – it seems plausible that coercion may have been at work here.

As fiction writers it is difficult to ignore the elements that form story. Let’s have a look at one possibility.

Story of the Bones

In 1913, Reck finds the oldest modern human – ever. That is our starting point, but not our story.

Researchers agree, at first, that the bones carry the same mineral signature as the rock matrix the skeleton was found in. So much so, that the rock seems to have fused with the bone – as if they had, at least for a moment, existed in the same place. Governments shudder, experts are paid and the findings come under swift attack.

Reck and his labeled “conspirator”, Leakey, are threatened. No more funding. Recant or face professional suicide when discredited. They recant. The bones and rock are locked away in the vault at the Munich Museum and forgotten. It’s 1937 – Hitler is on the horizon.

Five years pass, 1942, Hitler’s famous SS are on the prowl for occult artifacts that they feel will secure the Fuhrer’s power. They discover the bones and rock at the Munich Museum – the bad luck story of a time traveler attached to it. They don’t worry about the bad luck and focus on the time travel.

A couple years later, the Reich is falling apart. Hitler is advised to head to his bunker when an oddball scientist shows up with a claim the Fuhrer can’t ignore. The scientist has discovered the secret of the million year old skeleton locked in its bones, a chemical that breaks down matter and can move it across time. He has duplicated the chemical and has a vehicle capable of transporting two people through time.

Now we are at our story. The back story of the villain gives their motivation and also provides the goal of the hero.

Where will Hitler and Eva Braun travel? Where would the megalomaniac think his best option was? Back to earlier in the war with a chance to undo his mistakes? Into the future to raise a new Reich in an era ripe for war – like now? Or somewhere else? And, who will be there to stop them when they arrive?

Only you can decide.

The above is Alternate History. Here are some other possibilities: Who was the time traveler? What is his story? (Science Fiction). Transport the traveler – or Hitler to a world full of elves and trolls. Imagine the Fuhrer wandering the Shire. (Fantasy). Hitler transports into the body of someone else – someone powerful – like a king or president and their minds are merged. Who will win out and what will the maniac do with his newfound power. (Horror, Science Fiction, Psychological Thriller all come to mind dependent on who is taken over). The time traveler was really a space traveler and those he fled from are tracking the signal that is locked into his bones – and they are close. (Horror, Science Fiction, Thriller – possibly all three). A modern researcher/scientist tries to determine who the time traveler was. Anyone we know? The scientist himself, creating a twisted paradox? (Thriller and potentially, Paranormal).

Enjoy the seeds of story, my friends.

Gene Lempp is a writer blending elements of alternate history, the paranormal, fantasy, science fiction and horror for dark and delicious fun. He unearths stories by digging into history, archeology, myth and fable in his Designing from Bones blog series. “Only the moment is eternal and in a moment, everything will change,” sums the heart of his philosophy. You can find Gene at his Blog, Twitter, Facebook, Goodreads, WANATribe, Google+, Pinterest and StumbleUpon.
View all posts by Gene Lempp →
This entry was posted in Designing from Bones and tagged Adolf Hitler, Cradle of Mankind, designing from bones, Eva Braun, Gene Lempp, Hans Reck, Louis Leakey, Munich Museum, Nature Magazine, Olduvai Gorge, Olduvai Man, P.G.H Boswell, paleontological, Tanzania, writers, writing prompts, writing tips. Bookmark the permalink.