Welcome to Designing from Bones where we use the realities of the past to unearth the fiction of tomorrow.

Last week we took a look at the history and cultural practice of cannibalism. The roots of this practice predate written history and examples of it can be found in every culture from the primordial mists right up to the modern day. For the weak of stomach or those disposed to a gentler view, I’ll do my best to keep the discussion – tasteful, by approaching cannibalism from three writerly angles – as an aspect of culture, as an aspect of character and thematically. Today, we look at the individual practitioners and the mindset that compels them to seek manflesh.

First, the warped minds with a compulsion for human flesh. Most have heard of Jeffrey Dahmer, serial killer, cannibal experimenter. He was fairly mild compared to one of his earliest modern predecessors. 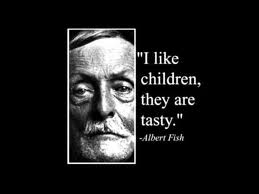 Yes, he actually said that.

A few may be familiar with Albert Fish, who over the course of 20 years (1924 onward) killed and ate children (the exact number was never clear). When Fish was questioned about his practices he described sumptuous meals of flesh strips with vegetables and spices, much like a delicious recipe for beef or pork. Yet, Fish refused to be labeled as insane, stating that he was simply “queer”, meaning of an unusual disposition, but a sane one. I doubt anyone then, or now, would agree with him.

However, cannibalism is not necessarily an officially recognized mental disorder and works detailing the psychology of a compulsive cannibal are scarce. Let’s look a few things that many of those like Dahmer and Fish have in common, in order to determine the character traits of this type.

As a fictional character – this type of cannibal would most likely live alone. Be sexually confused or deviant. Smile to your face, be easy to trust at first, and use techniques to lower your guard. They will take measures to mask their oddities. Remember, as hunters use camouflage to hide their skin so this form of cannibal uses it to hide their intentions.

This can make for a frightening and visceral villain as attested to by Hannibal Lector and others. If – you have the stomach to write it.

While the compelled cannibal seeks a form of power over their prey, we will now take a look at those seeking to gain power from human flesh.

The knowledge is passed on through a literal transfer of brains. But not this guy, he’s an Amazonian shaman – love the headdress.

One of the less discussed practices throughout history was the eating of a part of a deceased leader in order to transfer their presumed powers to their successor. The heart of a king. The brain of a shaman. The hands of a master artisan.

From a character viewpoint, they may consider this as a necessary, beneficiary, and even sacred act. The main point on using cannibalism in fiction is that it must be both primal and fully justified on the page. Leaving readers constantly disgusted will not turn pages (and if a reader does turn them, consider what that readers mental state is). However, fascination turns pages.

What if our eyes remembered everything they saw so that others could watch our visual memories like a film?

This is where “what if” becomes a powerful tool. What if a person actually gained magical powers from eating the brain of a dead shaman? What if eating a skilled artists hands allowed one to create works of art in the same manner as say DaVinci? What if eating the eyes of a murdered soul allowed the consumer to see the face of the person that killed the victim? See the point.

Using this form of cannibalism in fiction is about exploration and fascination, not shock value. By putting aside personal revulsion and carefully considering this option, a single skin-crawling scene can set the path for a powerful story that is not about cannibalism but born of it – as the fire of the Phoenix consumes it’s own flesh so to is it reborn from its own ashes.

This, I believe, is the one socially acceptable reason for cannibalism. Most of us are familiar with the story presented in the movie Alive about the crash of Uruguayan Flight 571. Stranded in the mountains during winter with few provisions and the chances of rescue before starvation slim, the survivors of the crash resorted to eating parts of the fallen.

Human survival instinct is a powerful, primal force that allows us to overcome a host of mental obstacles in order to stay alive and can suspend taboo’s in the name of continuation.

I recently re-watched Alive and I think the movie does a nice job of showcasing this point. Most of the survivors struggle with eating their teammates, friends and family. Some simply cannot partake even to survive. Others suspend their disgust and do what they must. And in those two statements lies the truth for fiction writers that approach this subject.

The story itself is about what people will do to survive. The power of the story is in the myriad of choices made and reasons used by the players. The story is not about cannibalism, which becomes a mere prop to the greater tale.

Rinse your plates, we’re done for today. Next week we will look at using cannibalism as a theme – it’s roots lie sprawled throughout the myths and legends of the past and provide palatable reasons for its use as a metaphorical tool in all forms of fiction.

This one is for all the parents that are enjoying summer vacation with their kids home. A good lesson in clear concise writing and something to look forward to. *smile*

And now, for those of you that made it this far, I’d like to know what YOU are interested in. People, places, subjects, concepts, hoaxes, mysteries, potential truths, you name it – if you think it is worthy of a future DfB post or series drop the idea in the comments and I’ll put it on the list for consideration. Heard about a race of flying cat people that ruled an obscure island featured on a Blackbeard treasure map – let me know about it. If I use the idea for a post I’ll credit it back to whomever brought it to me first.

I look forward to your comments and suggestions.

Gene Lempp is a writer blending elements of alternate history, the paranormal, fantasy, science fiction and horror for dark and delicious fun. He unearths stories by digging into history, archeology, myth and fable in his Designing from Bones blog series. “Only the moment is eternal and in a moment, everything will change,” sums the heart of his philosophy. You can find Gene at his Blog, Twitter, Facebook, Goodreads, WANATribe, Google+, Pinterest and StumbleUpon.
View all posts by Gene Lempp →
This entry was posted in Designing from Bones and tagged Albert Fish, Alive the movie, cannibalism, cannibals, Chijon Family, Chijon gang, designing from bones, eat kids free, Gene Lempp, Jeffrey Dahmer, reasons for cannibalism, survival instinct, Uruguayan Air Force Flight 571. Bookmark the permalink.