Welcome to Designing From Bones, where we use archaeology, myth, mysteries and history to unearth the stories of tomorrow.

What if all the secrets of the universe or a shadow reality were secretly hidden in the words of a cryptic text? What if you were holding that manuscript in your hands, a breath away from power, unable to unlock the secrets? Join me today as we search the pages of a rare and undecipherable text, that could be a hoax or could be the key to powers beyond imagination. 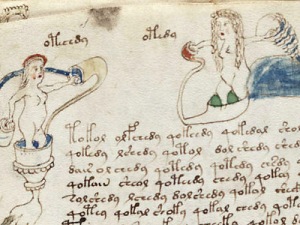 The Voynich Manuscript is an arcane text created sometime in the early to mid 1400’s. The author of the text remains in dispute with many of the candidates born either too early or too late to be considered valid.

The language and origin of the Voynich are the subject of scholarly debate. Bearing over 170,000 discrete symbols crafted in a flowing script, the text could be a hoax yet carries the hallmarks of one fluent in this unknown language. The text bears no known punctuation and many of the rows begin with oddly drawn bullets of stars or flowers. The best guess as to the manuscripts origins is that someone from the Far East (China or south-east Asia) wrote it using a natural language, one originally designed only for speech and converted to text by Western explorers.

A closeup of the writing

It is good to point out that most languages were initially designed this way. Prior to writing and even until fairly recent times, information was passed from generation to generation by use of the spoken word.

The earliest known owner was a 17th century alchemist named Georg Baresch. Georg considered the book a “Sphynx” or in modern terms, a waste of space. After hearing about the successful interpretation of Egyptian hieroglyphics, Baresch tried to enlist the help of Athanasius Kirchner, a Jesuit scholar at the Collegio Romano, but the later was more interested in purchasing the book than in helping decipher it.

After Baresch’s death in the early 1660’s, the book passed to a friend who sent it to Kirchner in Rome, where it vanished for nearly two centuries. In 1912, Wilfrid Voynich unearthed the volume in a box of books during a discrete sale of items by the cash desperate Collegio Romano. The book passed through several owners after the death of Voynich and is currently owned by the Beinecke Rare Book and Manuscript Library at Yale University (Beinecke M.S. 408).

The vellum tome contains 240 pages of obscure and undecipherable text and drawings. It is believed that the volume originally had 272 or more pages due to numbering gaps but these went missing prior to its modern discovery in 1912.

The manuscript is divided into six sections: Herbal, Astronomical, Biological, Cosmological, Pharmaceutical and Recipes. Each section contains various illustrations surrounded by text. For instance, each page of the Herbal section contains the drawing of one unidentifiable plant. Often, these are an expanded version of ones appearing in the Pharmaceutical section similar to what would be viewable with atomic microscopy but drawn well before the invention of the first microscope.

In the Astronomical section, are drawings of nymphs that encircle, grasp and occasionally wear as jewelry, the depicted stars. The Cosmological section contains fold out pages detailing unknown places, including one that shows a string of nine causeway connected islands, each with a castle; a volcano menacing the entire scene.

The one thing that all items, text or drawing, have in common throughout the Voynich, is that none of them can be related to anything known to the planet Earth.

While the language has similarities to many others, none has provided the sought for translation. All attempts to break the manuscripts code have failed. From World War I forward, American and British codebreakers, computer specialists and cipher masters have all tried their hand at deciphering this arcane text. In the early 1950’s a crack team of NSA cipher specialists met their match with the Voynich. 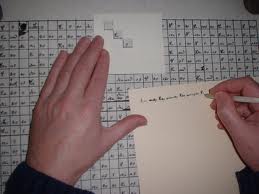 Using a Cardan Grille to make a Voynich-style language

In 2003, Gordon Rugg, a computer specialist, showed that the language could have been constructed using an item known as a Cardan Grille, a device for the creation of hoax languages. The only flaw in this belief is that the Cardan Grille did not come into use until a century after the believed creation of the Voynich Manuscript. Others tried to attribute the manuscript to Wilfrid Voynich himself, but later scientific testing proved that the manuscript was created 500 years prior to his birth.

None of the plants or astrological locations have been identified with certainty. The entire tome is shrouded in an enigmatic mystery.

Due to the vast amount of history, theories and studies of the Voynich contents, I’ve provided a few links at the end for those interested in learning more.

Here are a few of the story elements that came to mind for me, but many more await the alert seeker.

What if our hero, after discovering a tome similar to the Voynich, suddenly found himself stalked by shadowy figures, bent on reclaiming their lost grimoire? These figures could be cultists, aliens or perhaps, even ghosts, whose spirits are locked within the pages waiting for release.

What if the manuscript had faded back into obscurity after Voynich’s death? Vanishing, like the One Ring of Tolkein’s Saga, until our unlikely hero finds it. The manuscript, alive and with its own agenda begins to haunt our hero’s dreams, driving an obsession that cannot be fulfilled, or perhaps, driving him towards the discovery of an ancient secret to forgotten powers of the human mind. After all, how does one see atomic structure without the aid of modern optics and lasers? 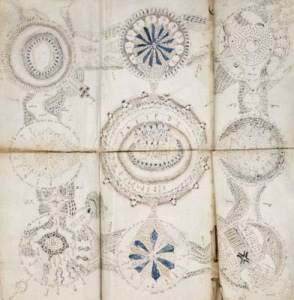 The Nine Islands and Central Volcano

What of the nine islands? What if they actually existed but could only be reached in a certain way or at a certain time noted by the astronomical charts contained in the manuscript? What if, in this place, all of the plants shown in the book exist, the language is spoken by those that live there and women are gifted with the power of the stars? Who will live in the nine castles and does the answer to the great riddle lie within the volcanoes beating heart?

What if the missing pages contained the key to the books cipher? Perhaps a secret society is waiting to reclaim the manuscript, having preserved the pages through the centuries to ensure the power of book could not be unleashed. As part of a prophecy? Until aliens arrive carrying the plants from their own world to ours? Perhaps a spell in the book can unleash the dead from their graves or break the seal between parallel universes or unlock the energies of the stars themselves?

What if the Voynich were a hoax, as many suggest? The writings nothing more than cleverly designed babble, the drawings but visions of an insane mind. What then? Is our hero the author, the one unraveling the mystery or the one attempting to sell the manuscript as genuine?

The choices are many – the truth is yours to decide.

What’s your take on the mysterious contents and history of the Voynich manuscript? What story do you think it keeps locked within its yellowed pages? I’d love to hear your thoughts.

Here’s those links I promised: Rene Zandbergen (includes a short and long tour of the Voynich’s history); World Mysteries (an in depth article on the manuscript); Beinecke Rare Book and Manuscript Library (the current home of the book and views of all the pages).

9 Responses to Designing From Bones ~ The Greatest Story Never Read