Designing from Bones – Cult of the Rooster Syndrome

Welcome to Designing from Bones, where we use archaeology, mythology and the artifacts of human history to find and design stories.

Join me through the misty portal friends as we navigate the islands of the South Pacific to discover one of the oddest religious inspirations of modern times and the lessons carried by it.

Trouser wearing primitives march down the length of an unpaved airstrip, chevrons and insignia painted on their skin. A pair sit in a tree wearing headsets made of coconut half-shells and straw while a group below them chants into a radio made of the same. At the end of the runway, sits a crude plane, the parody of a Cessna. A shaman stands in front of the flimsy object, arms shaking at the sky, calling out to the ancestors of his people to rain gifts and treasures on them – Marlboro and Hershey and Levi’s.

If you stepped out of the jungle onto this scene, what would you do? Walk away quickly? Snap a few shots for Facebook? Talk to the coconut men about getting an interview with the shaman? I wouldn’t suggest the last one unless you have a spare box of thin mints.

What you have just witnessed actually happened and in a few remote locations in the South Pacific still occurs. This, dear friends, is a Cargo Cult and one of the stranger religious practices of modern times.

Throughout the course of World War II, first the Japanese and then the United States used every available landmass, primarily islands, as bases for defense and supply. Each of these bases received regular shipments via airdrop, shipping and cargo plane. Many of these islands support native populations, still considered primitive in comparison to the technologically-advanced Japanese and U.S. forces.

Goods were often given to the natives for their services as guides and labor (and to keep them from attacking). When the war ended, the bases were abandoned and the flow of advanced supplies stopped.

On some of the islands, such as Tanna Island, Vanuatu and Papua New Guinea cults formed led by charismatic shamans who convinced segments of the populace that if they followed the rituals of the advanced cultures then their ancestors would deliver gifts to them in the same manner they had seen. By Ship. By Plane. By falling out of thin air.

Everything shown at the beginning of this post happened as a part of these ceremonies with the natives putting great effort into trying to replicate the actions of the Japanese and U.S. personnel in order to gain a similar result, specifically, manufactured supplies. Why? Because they lack understanding of how it is made and where it comes from, therefore it must be from the gods.

The Sect of Prince Philips; they should have asked for t-shirts.

One of the oddest of these movements is on Tanna Island. Called the Prince Philip Movement, this sect believes that the prince is a divine being, son of the mountains and brother of John Frum. After becoming aware of the sects beliefs, Prince Philip sent them a picture and received a ritual club as a gift. He then sent them a second picture posing with the club. Philip’s a good sport. After all they think he’s a god. The chief of the sect kept both pictures and a third sent later as personal treasures until his death in 2009.

John Frum, by the way, is a mythical American serviceman that if prayed to will bring prosperity and wealth to the faithful, a common figure among the cargo cults. 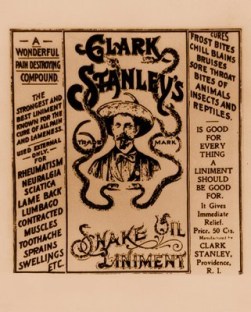 I’m sure writers will see the story potential here. A con artist playing on the beliefs of a native people to use them for his own schemes (has happened). Something the travel brochure didn’t mention (think romantic comedy). A shipwreck strands an American serviceman on the island and the sect makes him a god, but he better deliver. Or perhaps from the angle of a native and their attempts to call back the provider from the skies.

A bit of logic. Or false logic, as is the case here: Post hoc, ergo propter hoc, (‘post hoc’ for short), is Latin for “after this, therefore because of this”. This concept is a logical fallacy that can best be shown through the following statement called the Rooster Syndrome: “The rooster crows causing the sun to rise.”

A wife borrows her husbands car. The battery dies while she is at the store. The husband blames the wife, “I never had problems with the battery until you drove the car.” This is a fun technique to bring conflict into story, and it happens often enough that most of us have run into post hoc thinking on occasion.

When exploring history remember to see the impact of events between cultures and the logic that comes into play as a result of that contact. It can be as simple as introducing a new McDonald’s into a small town with only mom and pop restaurants or as strange as praying for the sky to rain moon pies.

I now return you through the misty portal, may John Frum be with you.

Have you heard of any other bizarre cults or events caused by contact between primitive and advanced cultures? How would you respond if you walked in on a cargo cult ceremony? Any thoughts on Post Hoc? I’d love to hear from you.

Be sure to check out my previous Designing from Bones posts for more great history and tips.

15 Responses to Designing from Bones – Cult of the Rooster Syndrome