Designing from Bones – Festival of Humanity

Welcome to my weekly series, Designing from Bones, where we use archaeology, mythology and the artifacts of human history to find and design stories. Join me today as we take a look at the ever evolving Festival of Humanity.

The portal keeper is away this week enjoying Saturnalia with his kin and so I thought that I would take the opportunity to share the history of the human festival with all of you. My gift at the close of a long and wonderful year.

Originating in Eleutherae, Attica, the Dionysia is generally considered a celebration of the cultivation of vines. While not originally attached to Dionysus, the god of wine, he was a natural fit for the festivities as the pantheon of ancient Greece established itself. The celebration was held each year in December with the days differing between communities thus allowing performers and spectators to travel between towns to intermingle and enjoy the variety of attractions.

The ceremonies started with a pompe (parade) featuring groups of children and patrons carrying baskets and bread, water and wine. The pompe was followed by dithyramb choruses (wild and enthusiastic poetry) and contests involving dancing and singing. This was a festival of the creative side of humanity with wine added, of course.

Dionysia evolved over time to include tragic drama’s pitting the best playwrights of ancient Greece against each other for fame and prizes beginning in 534 BCE at the Theater of Dionysia. More on this can be found in my post, Theatrical Roots, so I’ll not belabor this subject. 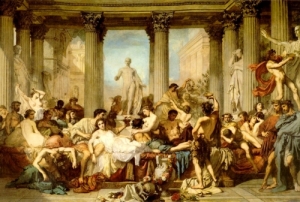 As Greece came under Roman control, Dionysia evolved into Bacchanalia and Saturnalia. Bacchanalia originally was a secretive gathering of women (no men allowed) on Aventine Hill on March 16th and 17th. Over time this changed and men were allowed, the celebration of Bacchanalia turning into a raucous and wild event of drinking and debauchery. Leave it to men to ensure things descend into chaos.

Saturnalia, on the other hand, was held between December 17th and 23rd and featured a public feast and a one week suspension of social norms. During this carnival to celebrate the end of the Roman year, slaves and master were equal, social laws were suspended to allow gambling and the party never stopped. Private gift-giving was a major part of the Saturnalia festival with items and tokens of endearment exchanged between friends and lovers. Another common gift was for a lord or master to serve those that had faithfully served them throughout the previous year. This festival seems a likely influence on the modern festival of Christmas due to these factors. 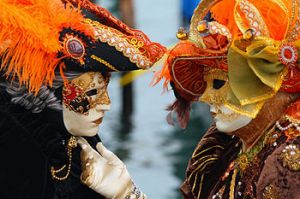 Nothing remains static in the human world and the festival is no exception. Saturnalia, Bacchanalia and a host of other minor festivals eventually merged into what is known as Carnival (sometimes with an ‘e’ added to the end). The Catholic tradition of Lent allowed no parties and asked the pious to abstain from pleasurable things, so naturally, to prepare for this, Carnival evolved bringing a “party till we literally can’t party any more” attitude to the days leading up to Lent.

Carnival then, much as now, features masquerade balls, the wearing of jester-like clothing, drinking, singing and dancing activities, eating fat and living large, free from the normal constraints of social and religious moors.  A carnival of humanity centered around the things that we love. 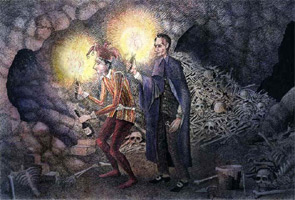 Carnival and celebrations in general make excellent settings for story. An example, which uses Carnival is Edgar Allen Poe’s “Cask of Amontillado”. In Poe’s story, Fortunato, the murderous hero convinces his inebriated antagonist Montresor that he has managed the purchase of a large quantity of rare Amontillado wine. Normally, these two men would be at odds, however, as Carnival is in session, social norms are relaxed and Montresor is baited into the drafty lower regions of Fortunato’s wine cellar. Fortunato is able to take his revenge on Montresor for his many slights against the Fortunato family name with impunity as a result.

Due to the mingling of peoples any story could occur during Carnival, from romance to mystery to tales of fancy and murder. The quality of the human festival is timeless and is sure to travel with our species should we travel into space so the door is open for science fiction as well. The bar scene in Star Wars carried a certain Carnival-ambiance, did it not?

For fun, as my final gift to all of you, I give you Festivus. Originally created by writer Dan O’Keefe and celebrated on December 23rd, Festivus is a secular holiday that features contests of strengths, the airing of differences and uses a bare aluminum pole attached to a plain wooden base to represent a Christmas tree.

Daniel O’Keefe, Dan’s son, introduced Festivus to popular culture through his position as a writer for the Seinfeld show. Airing as “The Strike” on December 18th, 1997, this episode positions the character of George as having grown up in a family that celebrated Festivus due to his father’s issues with the commercialism of Christmas. The clip below shows the highlights of the episode focusing around the Festivus story thread. Very fun if you have a couple of minutes for some holiday cheer.

I wish you all a happy holiday season, be that Christmas, Hanukkah, Kwanzaa or “a Festivus for the rest of us”. This will be my final post for 2011 while I take the remainder of the year to assess 2012 goals, do some adjustment to the site and spend time with family. The portal keeper and I will return on January 4, 2012 (January 2 for all my ROW80 companions) and look forward to an excellent coming year with all of you.

Gene Lempp is a writer blending elements of alternate history, the paranormal, fantasy, science fiction and horror for dark and delicious fun. He unearths stories by digging into history, archeology, myth and fable in his Designing from Bones blog series. “Only the moment is eternal and in a moment, everything will change,” sums the heart of his philosophy. You can find Gene at his Blog, Twitter, Facebook, Goodreads, WANATribe, Google+, Pinterest and StumbleUpon.
View all posts by Gene Lempp →
This entry was posted in Designing from Bones and tagged Attica, Bacchanalia, Carnival, carnival masks, Cask of Amontillado, Catholic, Dan O'Keefe, designing from bones, Dionysia, Dionysus, Edgar Allen Poe, Eleutherae, festivals, Festivus, Fortunato, Gene Lempp, Lent, Montresor, pompe, Saturnalia, Seinfeld, The Strike, Theater of Dionysia. Bookmark the permalink.

14 Responses to Designing from Bones – Festival of Humanity