Welcome to my weekly series, Designing from Bones, where we use archaeology, mythology and the artifacts of human history to find and design stories. Join me today as we hunt for a deadly beast, a magical legend and a powerful motif.

Come, my friends, the misty portal awaits us. I warn you well to heed no howling nor turn at the sound of padded feet following your step. Keep your eyes to the road ahead and pray we find no trouble on our journey today. 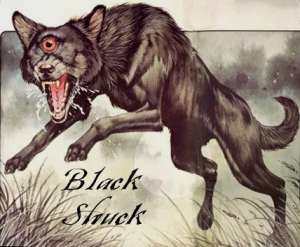 To the northeast of London lie four counties that form the bulging eastern heart of England, East Anglia. Since the late 1100’s the pastoral coastlines, villages, fields and byways of this historically impressive region have been haunted by appearances of a demon dog that roams the night. Emerging from the myths of a time when Vikings settled this place, Black Shuck, the mystic companion of Odin, has called East Anglia home, to the comfort of few and the fear of many.

Accounts of Black Shuck speak of a hound ranging in size from that of a calf to a full-grown horse. Its ethereal howl echoes in the soul, a harbinger of impending death to those that encounter it. With large red eyes, sometimes green, sometimes cyclopean, sometimes with no head at all, the beast stalks those walking the straight roads between graveyards at night. Roads aligned with magical ley lines. Pulsing with ancient power. Traveled by the dead. From graveyard. To graveyard.

Take a breath friend. Tonight the air is still and quiet. We are safe. Let’s look at three ways in which the legend of the Black Shuck speaks to us as writers about the power of myth. 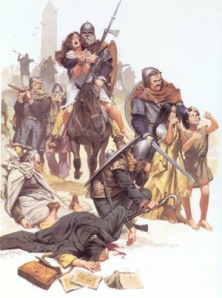 Lack of gentility made the Vikings easy to demonize

The Black Shuck was originally referred to as “scucca”, which means demon. Based on the myths of the feared and oft hated Vikings this hellhound served to reinforce the need of those that came after the famous raiders to exercise caution, especially at night and when alone. This dog of doom was birthed solely to demonize an old enemy and ensure that the common citizen would be thoughtful and prepared to let the authorities know if they saw something unusual lurking in the woods.

Throughout human history and into the current day it is common practice to demonize an enemy, be it personal (I can’t stand her), national (as in times of war) or to inspire a populace to act aggressively against a weaker group out of hatred (the basis of many genocides).

When considering your story, think of the setting and the history of the people and cultures that are set within this frame. Was there war at one time? Does a weaker group have more then a stronger one? Bad blood between a person in power and one that is not? Or reversed? Is it possible that the hero is caught up in legendary propaganda? In subtext? In action?

Demons haunt our dreams because they play on our fears. Play on your characters fears and that of the culture he/she belongs to and see what myths howl in the recesses of their minds. 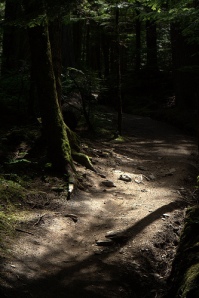 Brave or not, the shadows enjoy company

Urban dwellers often forget about the mostly rural roots of humanity. Of how a familiar path by day becomes a sinister and foreboding presence when traveled at night. Of how the shadows move and play as teasing spirits of our nightmares. Alone and with danger lurking in every owl’s hoot, we all would wish for a protector at such times.

Few myths have only one facet and Old Shuck is no exception. Some tales speak of this mighty hound appearing from the darkness to accompany lone women through dangerous places or to lead lost travelers to safer paths or home.

When considering the paths that our heroes will walk, what fears will play on their minds? Are they comfortable alone in the dark? Do they show strength in the face of the unfamiliar and uncertain? What protector would they wish for to accompany them through forbidding places and events?

Delving into the emotions of our heroes is a way to find their depth and knowing how they will respond will help us to show the reader as well. Toss a bone to the shadows and see what emerges to return it. 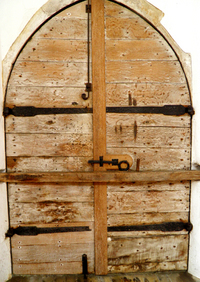 Are the dark marks from the claw of a fiery dog or the touch of lightning? You decide.

One legend concerning Black Shuck stands out above all others. On August 4, 1577, Black Shuck crashed through the doors of the church at Blythburgh, Suffolk, raced up the center aisle past a crowd of praying penitents and killed a man and boy kneeling before the altar. This act was swift. Heads snapped back. Dead. As they fell the churches steeple toppled and crashed through the roof. Black Shuck fled the church, trailing fire in his wake and leaving a burn mark on the church doors that yet remains today.

After fleeing Blythburgh, Black Shuck struck at the nearby village of Bungay killing a few more villagers in the church there. As it raced away into the night lightning struck the churches belfry shattering its clock and killing the two men within.

Both of these events share one thing in common other than Black Shuck and death – a vicious lightning storm raged over the region that night.

Imagine the Reverend Abraham Fleming of the Blythburgh church trying to explain to his congregation that two devoted followers were struck dead at the altar by a burst of lightning through the church doors. Killed in prayer by what is generally described as an act of God.

While it is certain that something happened at these churches that night, Black Shuck is not the likely cause. However, his myth allowed Reverend Fleming and his counterpart in Bungay to redirect the shock, anger and fear of their congregations away from their God and onto a despised myth.

Consider the myths that your heroes, antagonists or other players might use to cover their actions, movements or agendas. Perhaps a story their mother told them after the mysterious death of a loved one or during the height of a frightening storm.

A story based on the emotions of the audience guides perception. Doubt takes root. Fear engages. Hear the howl?

I now return you through the misty portal to your own time and place, for I feel the breath of Black Shuck on my neck and I’ll not find death in his hellish eyes.

If you would like to see an example of how the legend of Black Shuck was used in story, Sir Arthur Conan Doyle’s “Hound of the Baskervilles” was based on this creature.

The Hound of the Baskervilles

Were you told any scary tales as a child that seemed real? Tell any to your own children? Does your story world hold any myths or legends that can be used to delve into the emotions of your characters? Sense anything unusual when you walk alone through the shadows?

Gene Lempp is a writer blending elements of alternate history, the paranormal, fantasy, science fiction and horror for dark and delicious fun. He unearths stories by digging into history, archeology, myth and fable in his Designing from Bones blog series. “Only the moment is eternal and in a moment, everything will change,” sums the heart of his philosophy. You can find Gene at his Blog, Twitter, Facebook, Goodreads, WANATribe, Google+, Pinterest and StumbleUpon.
View all posts by Gene Lempp →
This entry was posted in Designing from Bones and tagged black dog, Black Shuck, Blythburgh, Bungay, cyclops dog, demon dog, demonize, designing from bones, devil dog, East Anglia, Gene Lempp, history, Hound of the Baskervilles, legend, myth, Odin, Reverend Abraham Fleming, scucca, shadows, Sir Arthur Conan Doyle, Vikings, writing prompts, writing tips. Bookmark the permalink.