Otzi emerges from a 5300 year slumber

Welcome to my weekly series, Designing from Bones, where we use archaeology, mythology and the artifacts of human history to find and design stories. Join me today as we  take a look at an historical figure that has gained fame and inspired one of Brad Pitt’s tattoo’s, Otzi the Iceman, to discover ideas on plot.

The stories of Otzi have been told many times over, adjusted for new information, theorized about, reanalyzed to spawn ever new theories and the search for all the truths wrapped in his mummified remains continues still. Follow me through the misty portal as we hunt for plot ideas surrounding Otzi and his final days.

For those not familiar with Otzi, he is a 5300 year old glacier mummy discovered in 1991 by a pair of German hikers on holiday in the Otzal Alps near the town of Hauslabjoch. Otzi’s remains and the area surrounding them have been extensively excavated to give us a clear picture of this ancient personage, from his final meals to the large assortment of gear he carried to the intricacies of his well-thought out clothing. He was killed by an arrow wound to the shoulder, whether murder or sacrifice is unknown, and frozen into history after death.

Many theories surround Otzi’s occupation. Most agree that Otzi was a shepherd, although others maintain that he was a raider (against neighboring tribes) or possibly a shaman (since he carried a medicine kit to treat the ailments he suffered from).

We will concentrate on these three potential occupations to discover possible plot ideas from the story of Otzi. Let’s play “what if” and see what we can find. 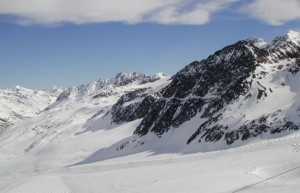 What it appears like in March where Otzi was found

While Otzi was found frozen in a glacier it is believed that he was killed during the spring or summer while at an advanced altitude. Leading a flock of sheep to higher altitudes is common, thus allowing them to eat their way back to the valley as the seasons advance.

Otzi was also in possession of a partially completed bow and arrows. This is an activity he would have plenty of time to indulge in while watching the sheep graze.

The fact that Otzi was working on a bow caught my attention the first time I read his story. Why would he need to arm himself to this degree and what story is implied?

Wolves (a story of man vs. nature)? Raiders from an enemy tribe (an action adventure in the high alps)? Rival shepherds trying to steal his flock (a cat and mouse wilderness thriller)? Or rivals desiring his elder status in the tribe (a political suspense thriller)? Perhaps, even a love triangle turned to murder (dark romance where the competent simple man loses to the younger virile tribesman).

By changing the time frame or location of any of these story concepts their usage broadens across all genres and expands the number of available plot ideas.

Also consider that as long as the motivations of the Otzi Hero and his antagonist remain universal, we have a story of death where the hero lives into the future to tell his tale long after the villain is dust and forgotten. Thus allowing us to use his story as a quest of discovery for another hero to find.

Since Otzi was well armed (rare copper ax, knife and bow) it is possible that he was the raider. What if he traveled into the high alps to steal sheep from a rival tribe or ambush the young love interest of his partner? He now becomes an antagonist and possibly a villain or he could be simply a jilted husband. An interesting literary story could explore the psychology of Otzi, showing how he was driven to his final demise on the frozen slopes of the alps. Or how he tried to defend his village and its territory only to pine away for the love he would never hold in his arms again.

Put him on a distant world in the future and the story stays the same. Drop him into the realm of faeries and dragons and yet he remains intact.

This illustrates a concept. The symbiotic nature of plot and character. Sure, some may not feel plot is necessary or that it may damage the voice of your muse, but I offer to you that character provides plot as much as plot creates character. Without an intriguing or tense situation how can one show depth of character and is not character forged and empowered by the trials one endures?

And now what I consider the juiciest morsel of all, adding shamanic properties to Otzi. Could we reanimate Otzi as a force of retribution or as a curse to all that disturb his peace (one of the actual myths surrounding Otzi and a wonderful seed for horror or thrillers)? In a fantasy we could make him a legendary warrior and shaman acting as a mentor to a protagonist (i.e. the Obi Wan of the Alps)? Looking for suspenseful romance? Otzi might not think the lovers worthy and thus become an antagonist driving a murderous conspiracy to remove him.

This brings to light a final concept on using historical figures to find plot. They can be Hero or Villain, assistant or resistive, revealed to their depths or cloaked in veils of mystery. When using an historical figure as a starting point, be sure to think of their story from all angles in order to discover the vast array of potential that each represents.

I now return you back through the misty portal to your own time and place. What historical figures have inspired ideas in your writing? How did you use them? as friend? or as foe?

Gene Lempp is a writer blending elements of alternate history, the paranormal, fantasy, science fiction and horror for dark and delicious fun. He unearths stories by digging into history, archeology, myth and fable in his Designing from Bones blog series. “Only the moment is eternal and in a moment, everything will change,” sums the heart of his philosophy. You can find Gene at his Blog, Twitter, Facebook, Goodreads, WANATribe, Google+, Pinterest and StumbleUpon.
View all posts by Gene Lempp →
This entry was posted in Designing from Bones and tagged alps, designing from bones, Gene Lempp, Hauslabjoch, Iceman, Otzal, Otzi, plotting, writing, writing prompts, writing tips. Bookmark the permalink.

20 Responses to The Iceman Plot