Welcome to my weekly series, Designing from Bones, where we use archaeology, mythology and the artifacts of human history to find and design stories. Join me today as we track down three groups of evil little people and the stories they provide us.

Welcome, friends, to the Zoo Arcane. Follow closely as we step through the misty portal to visit three species of malicious dwarves from Africa and Southeast Asia. Please note that the Zoo Arcane is not responsible for missing items, pets, children or appendages.

Tikoloshe: the dwarf of retribution

A common legend of the Bantu (referring to about a third of native Africans, including the Zulu tribes) speaks of an evil furry dwarf known as a Tikoloshe. Generally called upon by shamans to harass, injure and slay enemies, the Tikoloshe is a dangerous pet. They are called to life from the corpses of the dead, preferably those that have died due to acts violence and live to spread mischief and mayhem amongst the living.

Tikoloshe have hard thickened skin and eyeless sockets yet can see trouble brewing miles away. They sometimes take on different forms, such as a bear or other tough furry animal.

Other stories of this malevolent munchkin speak of its love for pestering schoolchildren on their way to and from school (which preempts the old adage: “the dog ate my lunch”).

In a YA tale our hero could mock an old man (shaman) who unleashes his pet Tikoloshe to exact retribution for the slight. First on the way to school but eventually in the classroom. Imagine the mayhem were one to appear at a sporting event or on the playground at lunch.

The Tikoloshe is born to generate horror, wearing down its victim until either the target of ire or the hunting dwarf must die. Imagine this happening in a small town with the Tikoloshe driving the hero to react in ways that make him appear insane. Distancing him, until finally attempting to claim revenge that will appear as suicide to the other townsfolk.

Put in these ear plugs friends and hold your totems close. Our next visit is to a creature that both abhors the living and loves to lead them to their graves. 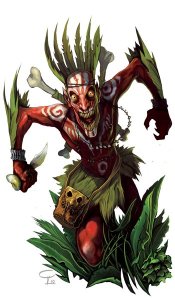 The Mongo tribes of DR Congo and Zaire whisper of evil little people called the Eloko that haunt the local forests waiting to unleash havok against the living. Deep within the forests the Eloko guard the bountiful food supplies more zealously then a merchant his gold. Hunters venturing off the path in search of the plentiful variety of fruit and meat  must carry tokens of power to survive for the creature can open its mouth wide enough to swallow an adult human whole.

Dressing in fallen leaves and using the hollows of trees as condo’s the Eloko grows grass in place of hair adding to its bizarre appearance and allowing it to easily blend with its environment. The Eloko use tiny bells to entice and trap those that enter into their realm, casting a siren bemusement on the hearer and luring them to their doom. They feed on humans the way we would on cattle and are especially good at charming females with their piercing gaze and tinkling bells.

Imagine a fantasy heroine or sci-fi explorer and her party stumbling onto a village or planet of Eloko. Unprepared and unaware they would at first seem to be harmless primitives. Yet, after an ally or two have been consumed in single swallows, the fight for survival would be on. The sweet ringing of small bells causing spines to chill

Choosing a heroine over a hero raises the stakes and tension as it is revealed that the Eloko have a greater power of charm over women.

As we once more pass through the misty portal to the splendid islands of the Philippines be sure to walk closely in my footsteps for there are things where we now travel that do not like to be disturbed by the wanderings of mankind.

Nuno: King of the Anthill

The people of the Philippines speak of an evil bearded dwarf, the Nuno, that lives in and near anthills. The Nuno retaliates against anyone that disturbs their environment (such as urinating on the ground) or damages their chosen anthill. The Nuno can spit on an offender causing the area touched to swell, bleed and at times infecting the person with fits of vomiting that includes the expulsion of a dark fluid from the mouth.

Children are often cautioned to be careful in areas inhabited by the Nuno (which interestingly corresponds to rises and falls in the red ant population and the love of children to play in untamed fields).

Killing a Nuno will free anyone affected by its curse. With an attraction to large female mammals the Nuno can be baited into revealing itself and is easily killed by pinching its head with the fingers of one hand, however, should its family and friends discover the humans treachery they in turn will hunt the Nuno-killers. Ah, the vicious cycle of demented nature.

Imagine a quiet day in a new suburban development. Children wander through the undeveloped woods nearby and enter a small opening dominated by a conical anthill. Being children they poke it with sticks until one boy (and you know there is always one) kicks the mound, slipping and falling onto it. The ants swarm over the boy as a small dwarf surprises the children, spitting on them and screeching as they turn and flee. First the boy that kicked the mound becomes deathly ill, coughing dark phlegm from his lungs. Other children display rashes that seem to eat away at skin and flesh. How will the parents respond? Or will it be up to the children to re-enter the woods in order to bait and kill the Nuno and free themselves from the curse?

And now my friends I return you to your own place and time. If you see something small scurrying about in the shadows, or witness the soft chime of bells in the distance, step away quickly and quietly and let your written words become your witness of things best left unseen.

Gene Lempp is a writer blending elements of alternate history, the paranormal, fantasy, science fiction and horror for dark and delicious fun. He unearths stories by digging into history, archeology, myth and fable in his Designing from Bones blog series. “Only the moment is eternal and in a moment, everything will change,” sums the heart of his philosophy. You can find Gene at his Blog, Twitter, Facebook, Goodreads, WANATribe, Google+, Pinterest and StumbleUpon.
View all posts by Gene Lempp →
This entry was posted in ROW80 Updates and tagged Africa, Bantu, designing from bones, DR Congo, dwarves, Eloko, evil little people, Gene Lempp, Nuno, Nunoman, Philippines, red ants, Tikoloshe, writing prompts, writing tips, Zaire, Zoo Arcane. Bookmark the permalink.