Designing from Bones – The Elements of Culture

Welcome to my weekly series, Designing from Bones, where we use archaeology and the artifacts of human history to find and design stories. Join me today as we explore the history and lessons of a Eurasian cultural hub, Cyprus.

Today, my friends, we pass through the misty portal to the ancient island of Cyprus. From humble beginnings to a richly-layered culture built by conquest and strife, this island is a cultural hub worthy of study and appreciation. 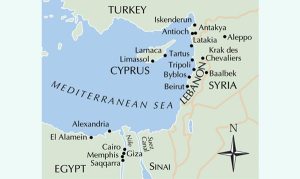 Cyprus is situated in the Mediterranean Sea to the south of Turkey and west of the Levant (Lebanon-Israel-Syria region today). Hunter-gatherers first came to the island around 12,000 years ago as evidenced by the digging of wells, some of the oldest in existence. By 8200 B.C. permanent settlements sprinkled the island, laying the foundation of the Cypriot culture. A 9500-year-old grave includes the body of an 8-month old domesticated cat, predating Egyptian culture, and making the Cypriot’s the first known to keep feline companions.

Like all cultures, that of Cyprus is complex and faceted. For our purposes today, let’s focus on the elements that impacted the formation and layering of Cypriot culture.

Due to strategic location and abundant resources of copper, Cyprus was the target of endless invasions and power plays throughout most of its history. Many of the conquering forces left lasting impressions.

The Hittites briefly controlled the island during the late Bronze Age but their waning empire gave way to the arrival of the Greeks around 1400 B.C. The Hittite presence would prepare them for mining and processing their bountiful copper veins and attracted the notice of Mycenaean traders.

Mycenaean Greeks listed the island as the birthplace of Aphrodite and Adonis and brought with them the concept of the city-state, of which the island hosted ten at one time. The Assyrians, Egyptians and Persians took turns controlling the island although the Cypriots maintained both their love of Greek culture and a high amount of autonomy under each of these rulers.

In 333 B.C.  Alexander the Great brought Cyprus under Greek rule once again. After his death control passed to the Hellenized Ptolemies of Egypt. This second Greek occupation introduced a broad selection of Classical Greek influences. The Tomb of the Kings is one example of this. Carved into the bedrock of the island and containing tombs that resemble fully functional houses, including Dorian columns of remarkable craftsmanship, the tombs were used by prominent citizens, treated as kings.

Rome annexed the island in 58 B.C. bringing with it piping used to upgrade Greek-style baths. When the Roman Empire split, Cyprus came under the rule of the Byzantine Empire which Christianized much of the population. This mixture of Hellenization and Christianity still exists on the island today (in the general form of Greek Orthodoxy).

For a period of three hundred years (649-965 A.D.) the Byzantine’s lost control of the island opening it up to raids and piracy from the Levant. This led to the slaughter of countless Cypriots and the theft of vast amounts of wealth.

The Byzantine’s regained control after a successful campaign against the pirates only to lose it again in 1181 when Richard I of England (a.k.a. Lionheart) captured the island and used it as a supply depot during the Third Crusade. Richard sold the island to the Templar Knights whose heavy-handed rule drove the Cyriots to revolt. Unable to quell the unrest, the Templar’s were forced to hand the island over to Guy of Lusignan, one-time king of the crusader state of Jerusalem, as compensation for the loss of the holy city to Saladin.

Guy and his family were officially recognized as the kings of Cyprus and ruled over the island until 1473 when the Republic of Venice gained control. Under the Venetians the Cypriot culture divided into two classes: Frankish nobles and Italian merchant families ruling over Greek Cypriots, serfs and laborers. Cultural diversity suffered and teetered on collapse during this time. The Venetians added advanced fortifications in an attempt to resist Ottoman invasions.

Fortifications are rarely the best answer and in 1570 the Ottoman’s seized control of the island.

The Ottomans executed the bulk of the Latin elite, replacing them with their own Janissaries and looted the islands cultural institutions. The Ottomans also abolished the feudal system of the previous owners and placed the head of the Church of Cyprus as the functional head of the Cypriot population in what is known as the millet system (non-Muslims being ruled over by their own religious leaders).

Ottoman rule was oppressive and inconsistent leading to constant rebellions and uprisings.

Following the Russo-Turkish war (1877-78), the Congress of Berlin leased Cyprus to the British Empire under an agreement where Britain would provide protection for the Ottomans against future Russian incursions. The British built several naval bases on the island and introduced the concepts of western democracy to the Cypriot people during this time. In 1960, Cyprus was granted independence, and while this is not the end of their road it is the end of the elements we will be looking at today.

I originally planned to come at Cyprus from a different angle but after reading the responses to last weeks cooking post, I began to consider the many layers of the world-building onion.

Whether our setting is a planet or a park bench there will always be more then one facet required to bring it to life.

The humble beginnings of Cyprus show a natural inclination of her inhabitants towards pragmatism. Surrounded by salt water they dug wells. They domesticated cats that could feed off the vermin of the island and required less care then dogs. This love of cats is doubly practical when we consider the mountainous nature of Cyprus; cats being far lighter and easier to travel with in mountainous regions.

The pragmatic nature of the Cypriots remained from conqueror to conqueror as they maintained their autonomy is one way or another. They revolted against those that wanted to lord authority over them all while integrating the best that each had to offer into the Cypriot culture. 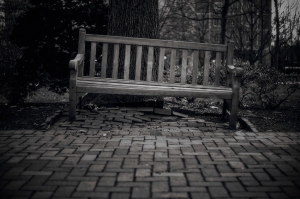 As we build our settings, what nature, theme or tone do they evoke? Is our park bench residing in a moonless corner of 1970′s Central Park, New York City? Or is it surrounded by the cultured lawn and flowered landscaping of a small Georgia town with wind slipping silken through the peach blossoms?

For a planet, fantasy world, kingdom or People, are we setting a solid keystone to build from and assessing the development of our world or People to each major event? The Cypriots, in space, might become the most powerful of worlds by adapting and absorbing the technology of those that try to conquer them? Or they might become an insidious slave race poisoning an empire from within.

The Klingons are an example of a well-founded race. With origins on a harsh planet inhabited by powerful predators, survival-of-the-fittest formed the keystone. By adapting a warrior culture and seeking military (weapons) advantage over their enemies they were able to survive and become a power in the galaxy.

And now, my friends, I return you back through the misty portal, but be assured that we will return to Cyprus one day, for there are many lessons to be learned here.

What cultures have you seen in stories that were well-founded? Any that you found lacking? Have any elements to share that will help others build strong cultures into their stories? I love to hear from you.

I’ll be on vacation next week, enjoying my birthday, doing fall home tasks and preparing for Round 4 of ROW80.

If you’re interested in more great information and ideas on writing, check out my previous Designing from Bones entries found in “Categories” on my side bar.

Gene Lempp is a writer blending elements of alternate history, the paranormal, fantasy, science fiction and horror for dark and delicious fun. He unearths stories by digging into history, archeology, myth and fable in his Designing from Bones blog series. “Only the moment is eternal and in a moment, everything will change,” sums the heart of his philosophy. You can find Gene at his Blog, Twitter, Facebook, Goodreads, WANATribe, Google+, Pinterest and StumbleUpon.
View all posts by Gene Lempp →
This entry was posted in Designing from Bones and tagged Adonis, Aphrodite, archaeology, Byzantine, cultural diversity, Cypriot, Cyprus, designing from bones, Dorian columns, feline domestication, Gene Lempp, history, Hittites, Levant, Mycenaean Greeks, Ottoman Empire, Richard Lionheart, Russo-Turkish War, Tomb of the Kings, well-digging, writing, writing prompt, writing tips. Bookmark the permalink.

22 Responses to Designing from Bones – The Elements of Culture